Understanding Non-Bank Lenders & How they Can Push Your Portfolio Further

What are Non-Bank Lenders?

A non-bank lender is a financial institution that offers home loans and other types of loans, but which doesn’t hold a banking licence.

Because of the fact that they cannot accept deposits and then loan those funds out to customers, they need to source their funds from elsewhere. These funds are wholesale funds usually from Australian Banks or overseas institutions. They then sell this money to customers at a higher rate which is how they generate their profit. Another way non-bank lenders source money is through ‘securitisation’, which involves bundling together a group of mortgages and selling this as an asset to investors.

Why Consider a Non-Bank Lender?

Non-banks have particular advantages over traditional banks in a few ways.

As a comparison, CBA will put a buffer of 30% on top of actual repayments with other financial institution debt. So, if the actual repayment on an existing loan is $2,500 per month, CBA will assess this as $3,250. (Assuming a 30 year loan with P&I repayments)

There is a significant assessment difference between the two lenders as the above example shows in regards to existing debt from other financial institutions. This is where a lot of Liberty’s ‘generosity’ comes from. Granted, there is some difference in way new loans are assessed too, but the main point of difference is how existing debt is assessed.

What Does it Mean in the Real World?

Below we will illustrate using a graph the difference in maximum capacity to borrow funds for a second investment property when the applicants have the following basic hypothetical financial position: 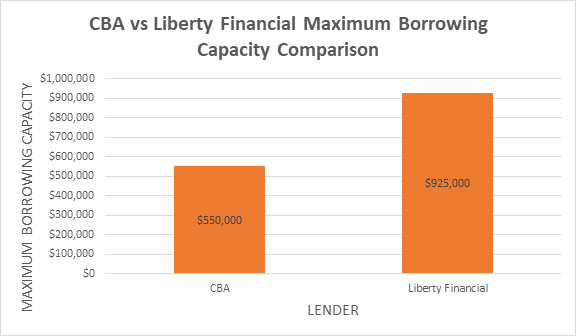 As can be seen in the graph above, there is quite a significant difference between the two maximum borrowing capacities. Liberty is able to generously offer $375,000 more to the applicants than what CBA can & this is largely due to the way existing debt is assessed.

So, Should I Use a Non-Bank?

Due to the typically generous servicing calculators of non-bank lenders, it can be easy to be leveraged to the maximum. But just because it is possible, it doesn’t mean it should be done without further risk analysis & mitigation. Consideration must be given to an exit strategy such as selling off within a specified time or being able to refinance the loan elsewhere where income is expected to increase or overall debt is expected to be reduced to strengthen servicing position once again.

Failure to have a sound exit strategy could leave you at the mercy of the non-bank. This means potentially much higher interest rates over time, fees & also the psychological strain caused by knowing you have been snookered into a corner with no foreseeable escape route. Tom from ChooseWisely, says “you should really consider all your options carefully before making a final decision to avoid long term headaches from a less than suitable finance setup.”

Non-banks can predominately be used as a way to push your portfolio further where servicing is an issue with the bank lenders. Especially if an opportunity has arisen where there is a likely shorter-term gain. An example might be a red-hot market where you need to get in now or may lose capital gain opportunities. But as mentioned above, have an exit strategy or a plan in place to get out when the benefit of using the non-bank is no longer apparent.

Non-banks can also provide some products that the major banks won’t provide in the current environment, including reverse mortgages. These products are designed specifically for seniors who have equity in their home who need to access funds, but would not service under a traditional borrowing capacity assessment. You will need to speak with an Australian based reverse mortgage broking specialist who can let you know your options.

Non-banks are usually a little more expensive up until about 80% then become much more expensive after that. Fees can be quite significant for things such as valuations and also establishment & applicant fees not to mention LMI. Where possible try and keep the LVR to 80% maximum

About the Author: Gerry Bosco

Gerry has worked in various roles within Finance & Banking ranging from Branch Management, Business Development and Sales roles with Banks and Non-Conforming Lenders. The 30 years of experience gained in banking has provided Gerry with a thorough understanding of the complex world of finance enabling him to assist clients in Sydney requiring help with complex lending requirements.