How are my Living Expenses calculated – Household Expenditure Measure

This Article is written by Gerry Bosco, one of Australia’s leading mortgage brokers assisting more borrowers get approved in the face of changing lending conditions. Need help with borrowing for your next home or investment? Call Gerry today on 1300 739 161.

What are average monthly living expenses?

Living expenses play a potentially crucial role in a lender’s servicing calculator. They are generally one part of the serviceability calculator that cannot really be reduced past a minimum floor, but certainly does have the potential to go much higher if applicants declare more than the minimum as specified by each specific lender as generally lenders will take the higher of the two.

What is the Household Expenditure Measure or HEM?

A particular method of calculating an applicant’s living expenses has been implemented almost across the board in recent times (estimated to be 70-80% of lenders). This method is called the Household Expenditure Measure (HEM). The HEM is a benchmark lenders use in an attempt to estimate a loan applicant’s annual living expenses — this forms part of the overall outgoing figure which in turn makes up part of the calculation that determines borrowing capacity. It was developed by using local survey data, is also linked to CPI and factors in the type of household.

There are several elements of the HEM which make up the estimated figure for any given applicant. These are:

In simple terms, the purpose of using the HEM is like using lesser used methods such as the HPI (Henderson Poverty Index – which focused on minimum income requirements relative to living costs) in that it assists lenders in make sure they are complying under the National Consumer Credit Protection Act 2009 (NCCP) by taking reasonable steps in determining whether or not a borrower can comfortably afford their loan repayments.

How Does Income Affect HEM?

Generally speaking, household income levels have a direct influence on the minimum living expenses calculated figure. Most lenders have a different weighting to how income affects the overall HEM estimate so it is difficult to quantify this across the board. It should also be noted that most lenders also add a non-disclosed buffer over the minimum HEM based on their risk appetite at the time which can be adjusted as their appetite changes.

In the below example, we will illustrate how the HEM figures positively correlate with income as it increases. We have used a simple single applicant on varying incomes using a major lender’s servicing calculator. Everything else relating to the serviceability calculator is disregarded for the purpose of this illustration. 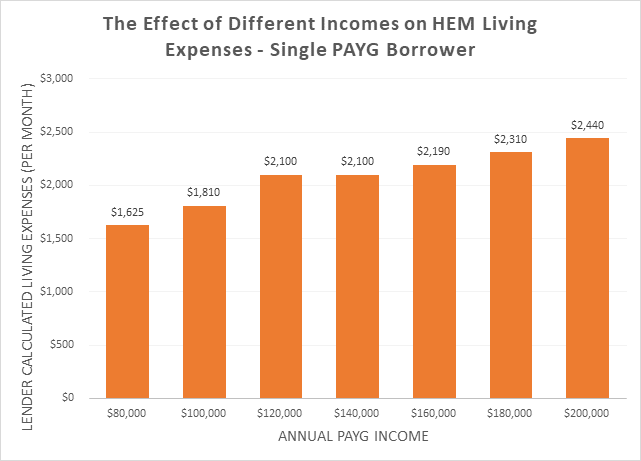 In another example, we will show a similar scenario but this time we will use a PAYG couple each earning full time salaries. 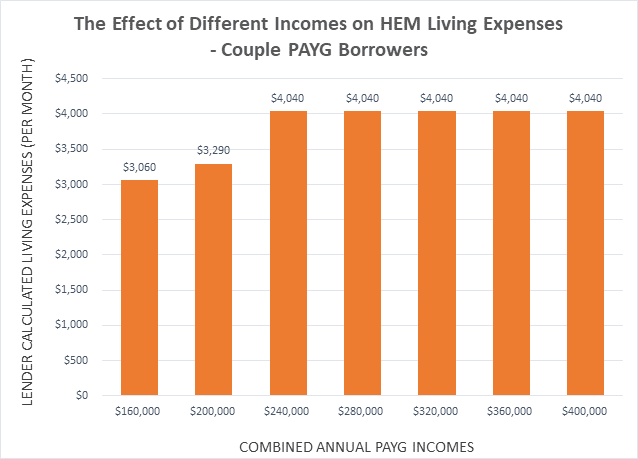 Here we can see a sharp increase between $200,000 – $240,000 then there is a plateau effect at the $240,000 level where no matter how much more income is earnt, the lender calculated minimum living expenses does not increase past this point.

There is also a more recent trend perhaps in response to regulator intervention and the influence of the Royal Commission findings thus far, which is seeing lenders asking for specific breakdown of each expense category for borrowers by providing a borrower declaration or statement. This is likely the beginning of a new phase in highly scrutinised living expenses by the lenders. We have started to see more and more lenders requesting bank statements for the purpose of checking transactions that can be matched with the declared expenses.

These systems are also being automated by lenders and 3rd parties who have been increasingly investing in software for the purpose of data matching and the auto categorisation of living expenses. This technology is being used already by some major lenders in their websites & phone applications.

These changes to living expenses are having a flow-on impact into borrowing capacity calculations for borrowers – with these changes we’re likely to see more borrowers having to use products such as bridging loans to support them when upgrading their homes before selling etc.

Although not perfected quite yet, it would seem like this is the way of the future as the technology becomes more refined and as the most efficient method of tracking and evidencing living expenses.

Are you looking for a bridging? Speak with one of our experienced Sydney based finance brokers today.

About the Author: Gerry Bosco

Gerry has worked in various roles within Finance & Banking ranging from Branch Management, Business Development and Sales roles with Banks and Non-Conforming Lenders. The 30 years of experience gained in banking has provided Gerry with a thorough understanding of the complex world of finance enabling him to assist clients in Sydney requiring help with complex lending requirements.